Written by Dean Billett
Friday, 21 May, 2021 / Published in Comparison Guides
18

Two easily confused flooring categories are hybrid flooring and laminate flooring. Both floors are installed in rafts and use a very similar method of installation. They both lock together using a locking system on the joins and are installed with perimeter raft breaks to allow the product to move where required.

What is a raft in flooring? A ‘raft’ of flooring is an area of a single kind of interconnected floorcovering, usually a hard floor type. It is mostly used with floors that require expansion breaks. If you had a floor that had an area of the timber that transitioned to an area of laminate, you would have 2 separate ‘rafts’. If one of these floors had an expansion break running through the middle of it, it would then break that single raft into 2 rafts.

An example of expansion break between flooring and wall with a spacer in place.

An example of a raft of timber flooring transitioning to tiles.

This is where the similarity ends.

Hybrid takes its name from the facts that:

It is certainly true that hybrid flooring has become the hot flooring category at the moment, but it is likely that very shortly there will be a large swing back toward the laminate category due to innovations in the category that have happened in the last few years.

Here we will have a look at these two flooring categories and where you might decide to use one over the other.

How Are Hybrid Flooring and Laminate Flooring Different?

Hybrid flooring (both SPC and WPC,) utilise a waterproof core with a built-in underlay. They also make use of the same Vinyl Picture Film and Polyurethane PVC Wear Layer that LVT Flooring uses. This enabled the hybrid category to have a very quick entry into the market as manufacturers were able to tap into already existing technologies.

Fibreboard can be manufactured perfectly smoothly so there is no show-through from the core into the picture film, but remain rigid enough for the picture and wear layer not to be compromised. Until recently though, this has been the main downfall of laminate flooring because the core could more easily absorb moisture and swell.

Hybrid Vs Laminate Flooring: Which One Comes Out on Top?

Are you deciding between hybrid vs laminate flooring? Our handy comparison table will help you choose the best option for your individual needs.

For more details about the benefits of each, read on below.

Whether a hybrid floor is WPC or SPC (or any of their variants,) they all use the same Polyurethane PVC Wear layer that is used in Vinyl Plank Flooring. This wear layer is tough, waterproof, but most importantly flexible, which allows it to be used on products that are not completely rigid. Hybrid is certainly considered a rigid product, but it is far more flexible than a laminate floor.

This wear layer while being scratch-resistant is still vulnerable to scratching when heavy or sharp items are dragged across it. It is also fairly stained resistant, but as it is open-pored on a micro level, this means that if things like beetroot juice and red wine can leave a residue if they are not dealt with within a short amount of time. Lastly, hot items like cigarette butts will burn the wear layer on this product.

Laminate on the other hand uses a Melamine wear layer. This wear layer is very hard, but has little lateral strength, meaning that if it is bent it will snap. However, once bonded to a fibreboard core, it provides the hardest, most scratch-resistant and most stain resistant wear layer of any flooring type.

Stains that would penetrate an LVT wear layer are easily removed from a laminate wear layer. Red Wine left on your floor for 16 hours can be removed fully with a little elbow grease. The laminate is also many times less likely to be scratched if it has furniture dragged across it. This is rarely if ever an issue. Lastly, a cigarette can be put out on a laminate floor, and any marks simply wipe off without the wear layer being damaged. 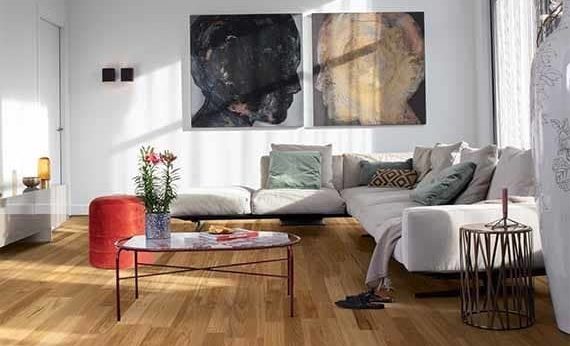 Hybrid flooring uses a vinyl picture film. This film is completely waterproof and is flexible. If the film is UV Stabilised, the product should not fade with age. The flexibility of this film makes it perfect to use with both Vinyl Plank and hybrid flooring. The quality of the print onto the vinyl is also very good today meaning that many of these films are very lifelike.

Laminate flooring uses a paper picture film that is then impregnated with resin. This makes the film very hard, but with little lateral strength, which is again the reason for the fibreboard core. Once this film is bonded to the core, this lateral strength issue is dealt with. The paper film allows for a more realistic print than what is possible onto a vinyl film. Whilst modern vinyl films are good, the films on a laminate are still more lifelike. Additionally, once the paper is bonded with resin it becomes waterproof.

This is the main area where hybrid has the advantage over most laminate flooring. Most hybrid flooring on the market is SPC as this has been the most successful product in the hybrid category. This core is made from mostly limestone powder with PVC as the bonding agent and UV stabiliser added. This core is completely waterproof, and grows little if at all with temperature change, and is never affected by ambient moisture ingress in the way that traditional laminate and timber flooring are. For Installation, most hybrids can be scored and snapped using a sharp knife, so the installation time is greatly reduced over laminate which must mostly be cut with power tools.

Laminate uses a High-Density Fibreboard Core, and this varies in quality. Products from Europe are generally of better quality than those in China, but that gap has closed. As with everything in this world, it is true with the laminate core, you truly get what you pay for. Cores on cheap laminate flooring are prone to water damage from the excessive water used on the floor, and also from moisture release from the slab under the floor if the slab is new, as well as being affected by ambient moisture ingress. Cheap cores in laminate flooring were almost the death of the category and there many horror stories of laminate jobs gone wrong.

In the last few years though there has been the release of water resistant laminates, many of which are so good that they are rated for use in wet areas, and products like AquaPlank from Signature Floors are also rated for Steam Mopping. This means that for daily use, they will perform just as effectively as a waterproof hybrid. There is no need to worry when mopping the floor or from kids running in from the pool. This end of the laminate category however is still more pricey than most hybrid flooring.

The Difference in Underlay

This is another area where hybrid shines over laminate. Hybrid flooring already has the underlay built into the back of the product meaning that you simply pull it out of the box and put it on the floor. This greatly increases the speed and reduces the difficulty of hybrid flooring Installation. Typically, these underlays are either foam, rubber or cork, but are all similar in performance.

Laminate on the other hand must be installed on a separate underlay which is rolled out onto the floor, and the product laid on top of it. Many do not have a waterproof membrane attached (200 Micron or greater,) with many membranes only being water-resistant. However, on new slabs, this can be ineffective as the slab releases water vapour for many years. Also, the fact that it is a separate item means that it is an additional cost to the product. 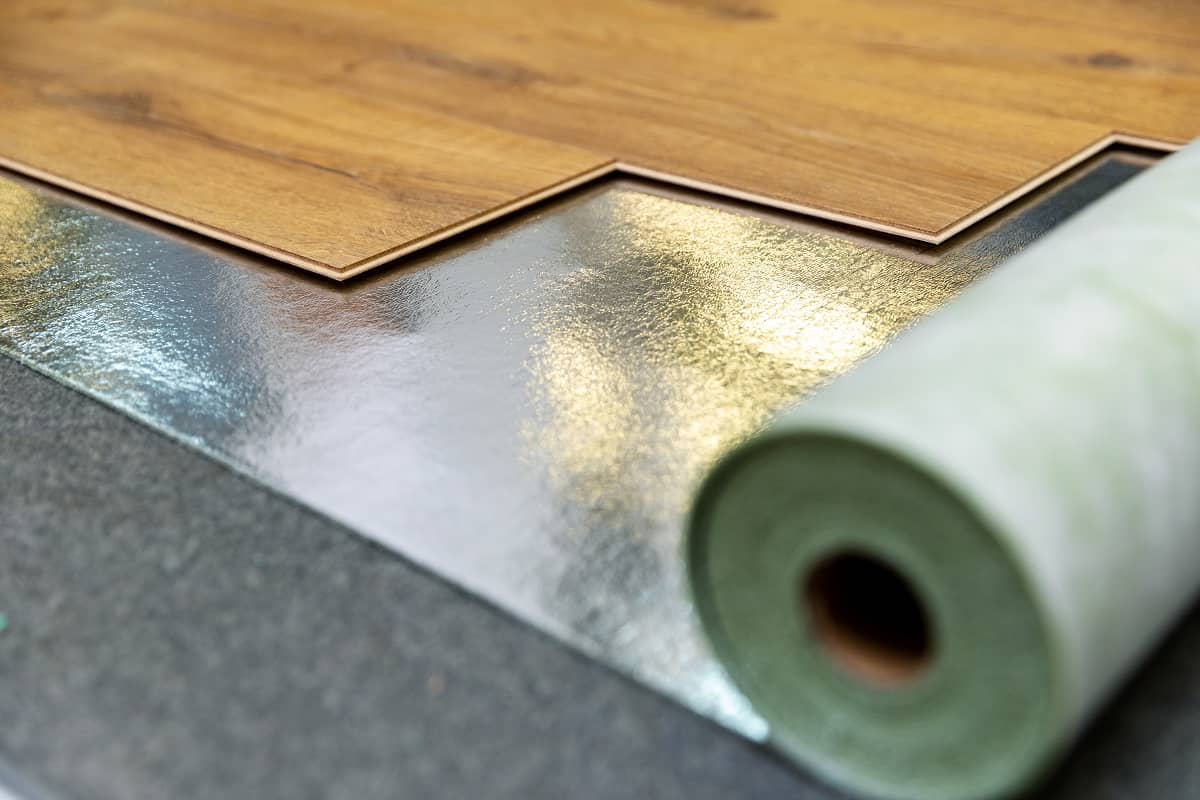 Underlay for laminate is installed separately while hybrid already has underlay attached into the back of the plank.

Hybrid flooring does not grow from moisture ingress but is sensitive to temperature change if the temperature is extreme. This has caused hybrid floors to grow in isolated areas, and because the rest of the floor is not growing, these areas cause ‘domes’ that lift off of the floor. This was an issue with SPC hybrid in the first couple of years but was soon rectified. Now, this is rarely an issue, and hybrid flooring grows little if at all.

Traditional laminate will grow with the seasons as its core equalises to the Moisture conditions of the environment. It does not grow as much as timber flooring, but this still must be accounted for.

Water resistant laminates grow far less because their core repels even the ambient environmental moisture. Some products like Aquaplank from Signature allow a raft size of 20m in either direction before the floor must be broken into separate rafts. For most homes, this means that no transitions are required with water resistant laminates. This is the same as hybrid flooring.

What are domes in hybrid flooring? A dome is where an area of hybrid flooring rises up off the ground during periods of intense heat. There has been no definitive cause of how this happens, although It’s said that in thinner hybrids, under intense heat, the wear layer expanded and caused like a ‘dome’ that would lift off the floor. It would disappear within 20 minutes of the sun moving off the floor. It only appears to happen in SPC hybrids of 5-6mm in thickness. This dome could be about a meter in diameter, rising in a gentle dome until it was about 40mm off the floor.

In this area, laminate has a longer history and many of the laminates today feature an Embossed in Register (EIR) finish where hybrid has not embraced this technology to the same degree. This gives a much more realistic and less ‘Plastic’ looking finish to the product.

Laminate flooring also has much longer boards available with boards up to 2.26m long. The longest hybrids on the market currently are 1.8m long, but an average tends to be 1.5m. laminate tends to boards tend to be between 1.2 and 2.26m long, and hybrid the range tends to be 1.2m to 1.8m.

Moisture resistant laminate though has solved this problem to a great degree. Over time though, if maintained, a laminate floor will show little sign of aging, where the hybrid wear layer will deteriorate over long periods in high traffic areas. AquaPlank from Signature Floors can be used in wet areas and perform just as effectively as a waterproof hybrid.

Hybrid flooring is quite quiet underfoot due to the amount of PVC used in the construction of the product. Laminate flooring can be quite noisy comparatively speaking. Many people do not like the sound and refer to it as ‘clip clop’ flooring.

A ‘raft’ of flooring is an area of a single ki

What's the difference between Hybrid and Laminate

Did you know bamboo flooring can surpass the durab